1. Introduction – Why this topic is important

The human brain has a prodigious capacity to think, communicate, learn and plan for the future. Alone in the animal kingdom, humans are the only species with language. Language allows people to work together, transmit knowledge, and help build the current civilization with its sophisticated scientific and technological achievements. The cortex is the part of the brain that only humans and some higher apes have; it is regarded as the seat of intelligence, a remarkable ability unique to the human race.

Despite their ability to dominate nature and all living beings, humans are still immersed in continual suffering. People can also generate hatred and killings on a much greater scale than any other animals. When Buddha attained enlightenment, he saw the root causes of suffering and conflicts, and the path to liberation. Today, we can reconcile the teachings of the Buddha with the scientific understanding of the brain in order to illuminate our spiritual path.

In this article, we will look at three aspects of knowing, i.e. knowing by the thinking mind, by the consciousness, and by the wordless awareness mind.

The thinking mind is the seat of thinking, reasoning, inference and argumentation. It is where the personality and learning originate. In terms of location, the thinking mind is located in the left pre-frontal cortex. It is also closely associated with language, which is a capability that only humans have.

The thinking mind is where we store past experiences, where we remember things that happened in the past, where we analyze, visualize, imagine, judge and compare with what we have learned from experience. This is where reasoning occurs through silent inner talk in order to solve problems. Inference and argumentation, based on past experience, occur there to imagine and predict the future. Our personality is mostly the expression of our thoughts, arising, for example, from habits of thinking about others, bad or good, loving or evil. The constant ruminations of the thinking mind generate states of mind such as sadness, joy, anger, jealousy, greed, misery, regret, etc. The key characteristic of the thinking mind is that it is based on past experience, on ideas that we have previously learned. A key function of the thinking mind, its capacity for reasoning, which forms the basis of intelligence, is often separately identified as the intellect.

The thinking mind is closely associated with language and with the silent inner self-talk that occurs in our mind. Located in the same left pre-frontal cortex as the thinking mind is a region of the brain called Broca’s area, which is a key area in the formation of language. Broca’s area is where concepts are decoded into language elements that are transferred to the tongue and throat muscles for pronouncement. 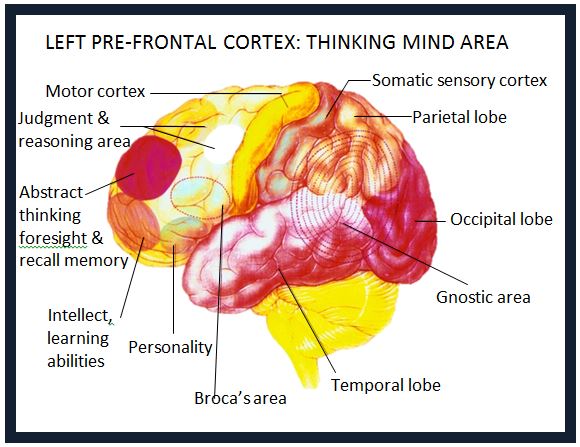 The suttas call the thinking mind “thought” (Pāli: mano, Sanskrit: manas, Vietnamese: ý) and the intellect the “mind” (Pāli and Sanskrit: citta, Vietnamese: tâm), but the combination of thinking mind, intellect, and consciousness, is also referred to as “mind” (citta).

Consciousness has the ability to differentiate objects and is the function that identifies an object when it comes into contact with the senses. It is the seat of “knowing by differentiation”, also called dualistic knowing. It always relies on differentiation and comparison: left / right, blue / red, good / bad, right / wrong, different / similar. Consciousness also needs an object; it is not activated if there is no object.

The suttas refer to the consciousness as viññāṇa in Pāli or vijñāna in Sanskrit. These terms are combinations of two words: “vi” meaning “division” or “distinction”, and “ñāṇa” or” jñāna” meaning “know”. Therefore, consciousness means knowing by distinction or by division.

The consciousness is located in the right pre-frontal cortex.

4. The past-present-future mind and suffering

When we think about the past, we recall sad memories, we regret the good times that are gone, we regret the missed opportunities, we are angry about words or actions that we think have offended us, we feel hatred towards those people who we think have caused us harm. When we differentiate and compare in the present, we desire to have more, we envy those who are ahead of us, we look down on those who are behind us, we see what people are doing wrong, we see what we are doing right, and we feel sorrow for anything deemed unsatisfactory in our life. When we plan the future, we desire the wealth, love and status that we think we are lacking, we envy those who have what we don’t, we feel dissatisfied with our current situation, we hate those we think are the cause of our current predicaments.

The suttas call the past-present-future mind the “false mind”, the Buddha calls it the “dirty water pond”. It brings sorrow and suffering. Sorrow and suffering come as the mind is attached to objects in the past, present, future. It wants to grasp, to possess objects but in this world there is nothing permanent, and wanting to grasp always leads to disappointment, regret, and unfulfilled dreams. Suffering and sorrow come because underneath the past-present-future mind is our unquenchable craving and the ego that is always anxious and never knows when is enough. Underneath this mind is also the mass of mental defilements, old habits, fetters and underlying tendencies that we carry in our mind from thousands of past lives.

When our mind is busy worrying about things, when we think, feel anxious or angry, the sympathetic nervous system gets activated and produces norepinephrine. This biochemical starts a chain reaction throughout the body that leads to psychosomatic illnesses such as high blood pressure. The past-present-future mind has a negative influence on the body as well as the mind.

The following is a summary diagram of the components of the false mind. 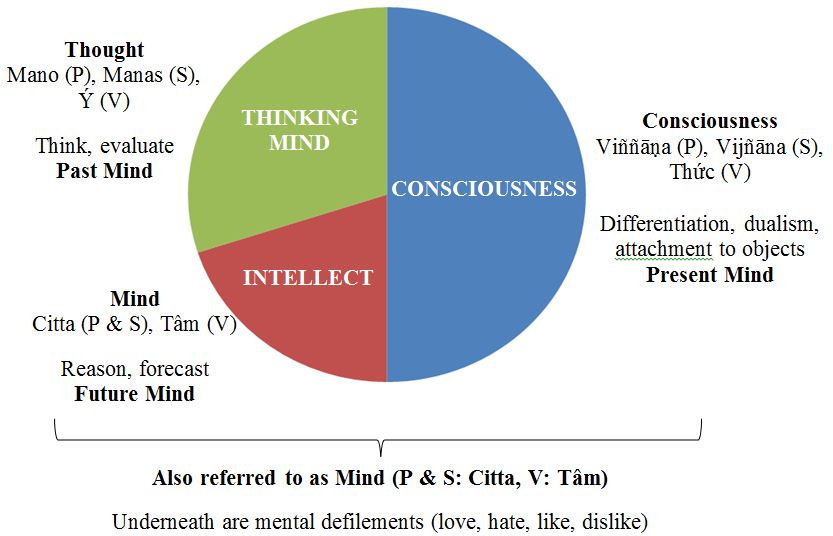 The wordless awareness mind is the essence or true nature of human beings that enables us to have a continuous knowledge of what is happening in the environment and inside the body. It is a continuous, permanent, uninterrupted knowledge that is always active whether or not there is anything to be processed. Wordless awareness is knowledge that is silent, non-verbal, without differentiation, without choice. Despite being choiceless, it has an innate analytical and intuitive faculty that allows us, when we come into contact with objects, to gain an immediate and clear appreciation of them while not being attached to them. Therefore, if an object is attractive, the wordless awareness mind does not get seduced. If the object betrays or humiliates the self, the mind stays calm and unaffected.

Wordless awareness is knowledge of what is happening in the environment and inside the body without any silent verbal commentary arising. When we move through life, it constantly processes what is happening, understanding everything while keeping the mind unaffected.

The wordless awareness mind is referred to in the suttas as buddhitā (P & S, V: tánh giác). Buddhitā consists of the word “buddhi” meaning “knowing”, and “tā” meaning “nature” or “essence”. Therefore, Buddhitā means “the nature of knowing”. It should not be confused with Buddhatā in which the word “buddha” means “enlightenment”. Buddhatā is our Buddha nature, it is our potential for enlightenment.

The knowing that arises from ultimate seeing, ultimate hearing, and ultimate touch is the first flash of knowledge that happens when the senses come into contact with an object. Ultimate cognition has a dual function: it acts in conjunction with ultimate seeing, ultimate hearing and ultimate touch to develop a cognitive understanding of the object, but it also has the capacity of self-cognitive awareness, awareness of itself without the need for a stimulus.

The knowledge gained through wordless awareness is instantaneous, it occurs at the first unit of time when the senses come into contact with an object before any words have arisen in the mind. This knowledge is clear, complete and insightful, l but does not involve differentiation, comparison, praise or blame, like or dislike, nor any other emotions. Knowing through the wordless awareness mind is objective. The wordless awareness mind sees the object exactly as it is, while the mind is totally at peace, untroubled. This is why it is also called the here-and-now mind.

Zen Buddhism often compares the wordless awareness mind with a mirror or the surface of a lake, which faithfully reflects images without keeping a trace. This is so in the following poem by 17th century Vietnamese Zen Master Hương Hải Thiền Sư:

The wordless awareness mind and, in particular, its deepest component the Buddha nature is our potential for enlightenment, our ability to discover new and innovative things that we have never previously known. Developmental Buddhism calls it the “true mind”; Zen Buddhism calls it “the boss”. 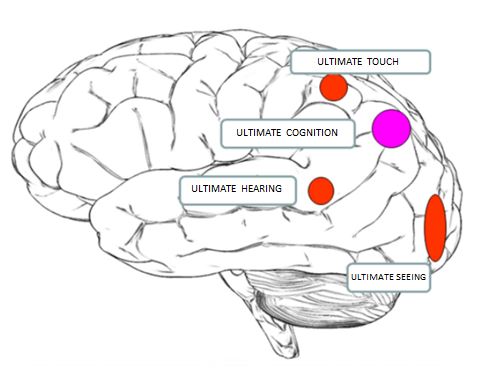 When we practice wordless awareness, our mind is completely still, and this stimulates one or several of ultimate seeing, ultimate hearing, ultimate touch, and ultimate cognition. This, in turn, causes spiritual wisdom to burst forth. Meanwhile, the parasympathetic nervous system is activated and produces acetylcholine, which regulates blood pressure and brings balance to the internal organs. The result is a healthy body, peaceful mind, and developed spiritual wisdom, leading to an end of suffering and sorrow in the mind and body.

6. Summary Diagram of the Three Aspects of Knowing 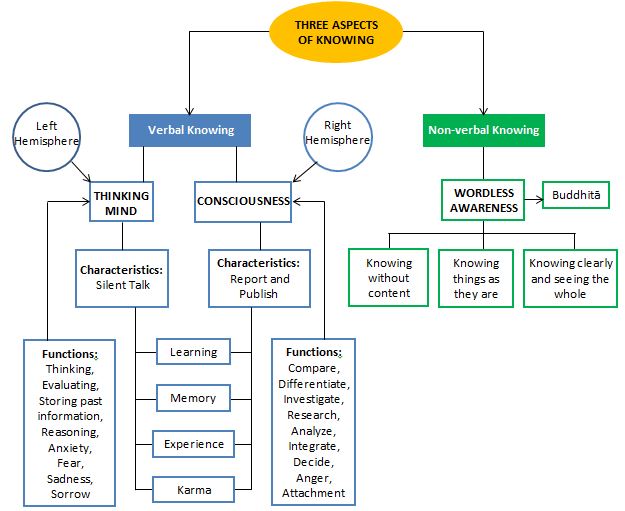