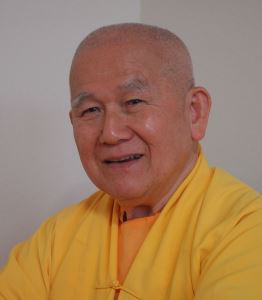 Zen Master Thích Thông Triệt was born in 1929 in South Vietnam. Already in his youth, he was drawn towards Zen Buddhism to find answers to the many spiritual questions that he had, but it was not until the end of 1972, when he was nearly 40, that he decided to leave behind all worldly relationships to enter monastic life. Through the introduction of Venerable Thích Thiện Hoa, he was accepted as a disciple by pre-eminent Zen Master Thích Thanh Từ and was officially ordained at the Vesak of 1974 which fell on 12 May 1974. He started his training under Zen Master Thích Thanh Từ at his second meditation seminar organized at the Chân Không monastery in Vũng Tàu, South Vietnam.

In July 1975, several months after the fall of South Vietnam, he was taken away for what became 14 years in labor re-education camps scattered across North and South Vietnam. He calls this period his “unsolicited meditation retreat”. For the first seven years, he took advantage of his situation to practice meditation for ten hours a day. But the results were disappointing: he experienced poor health and often felt anxious and disheartened.

He suspected that these disastrous effects on his body and mind were the result of an incorrect meditation practice, but he did not know what exactly was wrong with his practice.

At the beginning of 1982, Master Thích Thông Triệt felt at a dead end and in utter despair. He had been strenuously practicing for seven years without ever experiencing samādhi. On the contrary, he continued to be dominated by wandering thoughts. At 3am on the fourth day after the lunar new year, in early February 1982, he felt so disheartened at not being able to find a solution to his problems that he took a ball pen and wrote a series of “no” items on a piece of paper: “No meditation, no contemplation, no samatha, no samādhi, no abiding, no no, no leaving, no without, no extinguishing, no collecting, no emptiness, no, no, no, no!”

He made a strong stroke of the ball pen under the last “no” word, and as he looked at his arm shooting over his head, he suddenly experienced realization. He saw the answer that had eluded him for so long, that is: “Stillness of mind is achieved when there is no verbal chatter in the mind!”. He laughed out loud with joy! At that moment he realized that for too long he had been caught in the complicated terminology of Zen Buddhism commentary texts. Once he stripped away the complicated terminology and just stopped the verbal chatter in the mind, he managed to step into clear, vast and empty awareness. Four verses immediately sprang into his head:

I have finished with worldly matters
My mind is serene like the clouds in the sky
There is nothing that needs to be said
Thoughts cease, words cease, mind is empty….

He knew that this was a spiritual realization, a realization achieved by the sense of ultimate touch being stimulated by the movement of his arm.

Once he had digested the meaning of his realization, he made a vow: When he recovers his freedom, he will study the Pāli texts of Early Buddhism and will use the process by which the Buddha practiced, achieved his realization and then full enlightenment, as a foundation to teach Buddhist meditation. This process represents the quintessence of Buddhist meditation and is based on awareness (P: pajānati).

After his spiritual realization, Master Thích Thông Triệt felt a constant feeling of joy arising in him, and no longer worried about when he would be freed from prison. He did not feel startled or scared when the prison guards called him up, as he had felt previously. His mind was serene. He thought that his imprisonment was due to karma from previous lives, and once the causal conditions were extinguished he would be free. Meanwhile, as his karma was not yet exhausted, he would just accept his condition and repay his karma.

By mid-1982, only months after his spiritual realization, the psychosomatic illnesses that had previously affected him progressively disappeared, and his face became radiant. He vowed to study neuroscience once freed, to understand how the brain operates when a person is in a state of samādhi, and to establish what biochemical substances are secreted when a person practices meditation correctly or incorrectly.

Master Thích Thông Triệt recovered his freedom in February 1989, and in December 1992, arrived in the United States, initially settling in Seattle, WA. In early 1993, he visited a friend in Hawaii, and there a beneficial causal condition occurred through his acquaintance with Dr David Johnson, Ph.D in Social Psychology, University of Hawaii. Mr. Johnson took him to the University of Hawaii library, where he found an 800-page book on the hypothalamus. That was the start of his study into neuroscience.

Since 1994, he had had the wish to use Positron Emission Tomography (PET) to take images of the brain while in meditation and identify the location of the four elements of the wordless awareness mind: ultimate seeing, ultimate hearing, ultimate touch and ultimate cognition, mentioned by the Buddha in the Bahiyā sutta (Khuddaka Nikāya “Minor discourses”, Book 3 Udāna ”The inspired un-prompted discourses”). However, he couldn’t realize this dream due to the high costs involved.

In order to get himself ready for when the right conditions arose, he focused on attaining a state of deep meditation at will in the four postures of walking, standing, lying and sitting. He trained his mind to let thoughts arise when he wanted them to, since otherwise it would stay still in the state of wordless awareness or tathā-mind.

In 2006, while on a teaching trip to Germany, the necessary conditions were finally met and Master Thích Thông Triệt’s dream of brain imaging came true.

Through perseverance and beneficial conditions, a Sunyata meditation student in Germany managed to get in touch with Dr Michael Erb, a research fellow at the Department of Neuroradiology at the University of Tübingen, Germany. What followed was a fruitful collaboration with Dr Michael Erb and Dr Sitaram Ranganatha, a research scientist at the Institute of Medical Psychology and Behavioral Neurobiology, Tübingen. This resulted in a series of experiments and measurements using fMRI (functional Magnetic Resonance Imaging) and EEG (electroencephalography) equipment involving Master Thích Thông Triệt and several other Sunyata meditation practitioners in 2007, 2008, 2009, 2010 and 2013.

The results were reported by Dr Michael Erb and Dr Sitaram Ranganatha in papers presented at the OHBM (Organization of Human Brain Mapping) Annual Meeting in 2010 in Barcelona, Spain, and in 2011 in Quebec City, Canada.

The brain imaging program conducted with the University of Tübingen scientifically validated what Master Thích Thông Triệt already knew through his spiritual insight, in particular:

The experiments also identified the location of the tathā-mind or wordless cognitive awareness as the precuneus area of the cortex.

Meditation at the service of humanity

Master Thích Thông Triệt has combined the essence of the four schools of Buddhism – Early Buddhism, Theravāda Buddhism, Developmental Buddhism and Zen Buddhism – with the findings of neuroscience into a practical method that guides students towards experiencing wordless awareness and eventually internalizing suchness nature. By reconciling neuroscience with meditation, he has demonstrated that Buddhism meditation is truly an experimental spiritual science and has developed practical methods to help students taste the ultimate fruits of meditation.

Finally, for Master Thích Thông Triệt, the main aim of meditation is to serve society and create harmony. First, meditation creates harmony within the mind and body of the practitioner, leading to physical and mental well-being and spiritual growth. Second, meditation creates harmony within the family unit, the community, and wider environment by promoting an objective perspective on life, seeing things objectively just as they are, by weakening the noxious energy of the ego and mental defilements, and by fostering benevolence, compassion, empathetic joy and equanimity. Last, for those who want to go further on the spiritual path, Buddhist meditation is the gate that leads to the end of suffering, enlightenment and liberation from the cycle of deaths and rebirths.

Under the guidance of Master Thích Thông Triệt, meditation is no longer a difficult and mysterious subject. His life story, his insights and the way he conducts his life will continue to be a source of spiritual inspiration for many future generations.